On a cold morning in early December last year, I found myself sitting in the Highgate Literary and Scientific Institution in London, looking at pages and pages of breasts.

Pausing occasionally to wonder at the collection of life choices which had led to this moment, I scanned these black and white photographs of lactating women from the 1920s and 1930s, attempting to understand the set of criteria according to which they were categorised into ‘good’ and ‘bad’ breasts.

The pictures were taken and kept by the Mothercraft Training Centre in London, and were intended for nurses and other healthcare practitioners working with mothers and young babies. Informed by the programme of scientific childrearing developed by the New Zealand doctor Truby King during the first decade of the twentieth century, the Centre’s staff promoted breastfeeding as the best way of providing babies with adequate nutrition.

In King’s view, breastfeeding needed to be approached scientifically. Mothers should not feed on demand but, rather, according to a strict schedule, depending on the age of the infant. This feeding by the clock was a technique aimed as much at mothers as it was at shaping obedient and self-reliant babies and young children.

Like other specialists in the relatively new field of paediatrics, King believed that mothers were irrational and emotional, and inclined to follow what he characterised as the unscientific and unsanitary advice provided by their female relatives. By breastfeeding in King’s ‘scientific’ manner, mothers could learn to be rational creatures.

In King’s view, not only were there right and wrong ways of breastfeeding, but also good and bad breasts. The photographs in the Mothercraft Training Centre’s collection were meant to help nurses identify the link between the shape of women’s breasts and the ways they would feed their babies.

I was reminded of these photographs this week by the most recent cover of Time magazine, which features 26 year-old Jamie Lynn Grumet breastfeeding her son. She is young, slim, and wears a skimpy top, and her child is a sturdy three year-old. 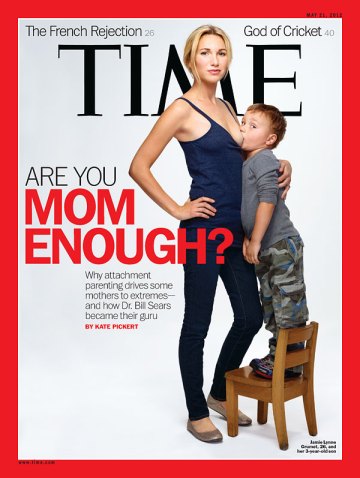 The debate which erupted around the cover focussed on the age of the boy: wasn’t it weird, asked some, for a mother to be feeding so old a child? The picture – deliberately, I think – provoked this controversy by upsetting contemporary notions of what nurturing motherhood should look like.

But what interested me is that Time chose this particular photograph for its cover. The edition’s focus is not, in fact, on breastfeeding. It’s about a popular childrearing guide The Baby Book (1992) written by William Sears, which advocates that mothers and babies remain as close together as possible for as long as possible. Kate Pickert explains:

While the concept sounds simple, the practicalities of attachment parenting ask a great deal of mothers. The three basic tenets are breast-feeding (sometimes into toddlerhood), co-sleeping (inviting babies into the parental bed or pulling a bassinet alongside it) and ‘baby wearing,’ in which infants are literally attached to their mothers via slings. Attachment-parenting dogma also says that every baby’s whimper is a plea for help and that no infant should ever be left to cry.

Hilariously lampooned by Maggie Gyllenhaal in Away We Go, attachment parenting has been the subject of extensive and frequently ferocious debate. Breastfeeding, though, is only one feature of this particular mode of parenting. So why the cover on Time? It’s partly because photographs of breastfeeding women still – depressingly – provoke argument. As Jill Lepore writes, there’s a long history of banning magazines which print pictures of breastfeeding women:

Like its historical antecedents – a centrefold in a 1938 issue of Life called ‘The Birth of a Baby,’ and another, in 1965, called ‘The Drama of Life’ – it has gotten a great deal of attention. Sales have been brisk. Interest has been prurient. Outrage is all the rage.

Life’s ‘Birth of a Baby’ issue was banned all over the country (but not before selling seventeen million copies). Overnight, Gallup conducted a nationwide poll, asking: ‘In your opinion, do these pictures violate the law against publication of material which is obscene, filthy or indecent?’ (Twenty-four per cent of respondents said yes; seventy-six per cent no.) A generation later, the photographs on the 1965 cover, ‘The Drama of Life’ were shipped into outer space on board the Voyager (but not before selling eight million copies in four days). Each gave rise to criticism, some of it quite wonderful. The week after Life published ‘The Birth of a Baby,’ The New Yorker published a parody, called ‘The Birth of an Adult,’ written by EB White. ‘The Birth of an Adult is presented with no particular regard for good taste,’ White wrote. ‘The editors feel that adults are so rare, no question of taste is involved.’

‘Respectable’ news magazines often print photographs of women with semi-covered breasts. If these usually sexualised images of women are tolerated, why do pictures of breastfeeding women provoke such disgust? Given that the World Health Organisation and many governments advise mothers to breastfeed their babies exclusively for the first six months of life, it seems strange that breastfeeding women should be regarded as a kind of social embarrassment.

Indeed, Facebook’s decision to treat photographs of women breastfeeding as pornography, and women’s experiences of being forced out of public spaces when breastfeeding, seem to suggest that the issue is connected to how women’s bodies are understood socially.

Our bodies are socially and culturally constructed. As South Africa has seen over the past fortnight, the portrayal of the President’s penis in Brett Murray’s painting ‘The Spear’ has provoked outrage partly because it defies taboos around nudity in some South African communities and is seen as being part of a long history of white exploitation of black bodies.

Depictions of breastfeeding women are relatively common in art before the early twentieth century. These were meant to celebrate women as mothers – in a role which most believed celebrated women’s God-given and ‘natural’ role on earth. The photographs of lactating breasts in the Mothercraft Training Centre collection were intended for medical purposes – as were the pictures of breastfeeding mothers in mothercraft publications. I wonder if it’s possible to link the worldwide decline in breastfeeding during the 1940s and 1950s to the decreasing tolerance for the portrayal of breastfeeding women in popular publications? As breasts have become increasingly sexualised in advertising and the media, has this accompanied a discomfort with the idea that they can also be used to nourish and to nurture?

Although decades apart, there are similarities between the attitudes which informed mothercraft and those behind the Time cover: that women’s bodies are not their own to control. The Time cover suggests, firstly, that breastfeeding in public is not only worthy of comment, but also freakish – that it should be done within the secluded confines of the home. And, secondly, it implies that when women are in charge of raising their children, they behave irrationally: that they embrace ‘gurus’ and are ‘driven to extremes’. There is nothing on this cover to suggest that this mother chose – calmly and carefully – to feed and to care for her child in this way.