Things that happened in Joburg this week

What happened in Johannesburg – city of prophets and miracles – this week.

A man tried to buy an overpriced rocket launcher in the CBD. 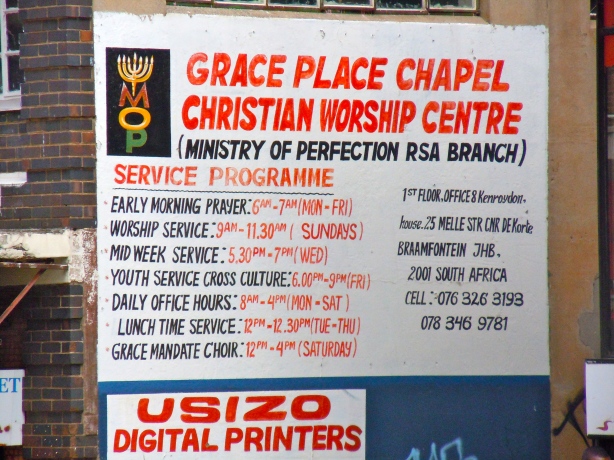 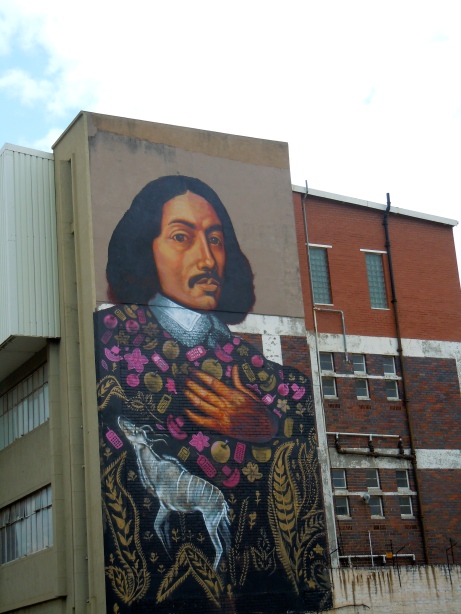 A community newspaper reports that two men have claimed an empty coffin found abandoned in Linden. They say they plan to use it as a TV stand. 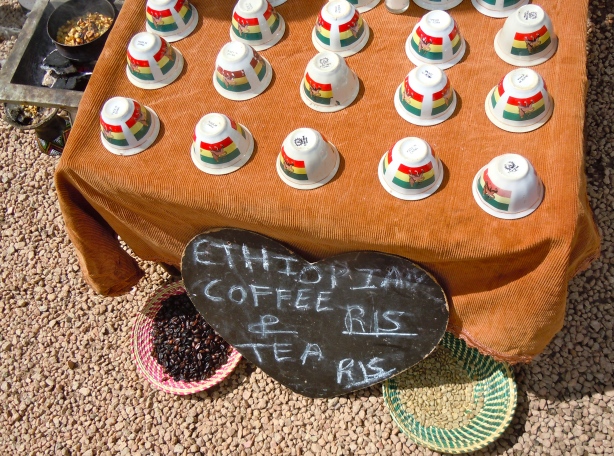 I don’t even know where to begin with this.

Every summer my mother and I make preserves. We have two staples – Christmas chutney and red pepper relish – which, occasionally, we’ve augmented with piccalilli, boerenjongens (currants in brandy), and pickled pears. When we started this more than a decade ago, chutney- and jam-making was seen as the sort of thing that grandmothers did, and this despite the long tradition of preserving and pickling in South Africa’s fruit growing regions.

More recently, though, preserving has become fashionable. Recipes for chutneys abound on hipster blogs and cooler recipe sites; Punk Domestics has an enormous following; and even Girls features a maker of ‘artisanal mustard’ (Charlie’s profoundly irritating girlfriend, Audrey). This, though, is part of a wider trend: a rediscovery of domesticity, particularly – although not exclusively – among young women in their 20s and 30s. The existence of a café specialising in crafts – Drink, Shop, Do – in London’s Kings Cross, points to the numbers of people who are part of this trend. 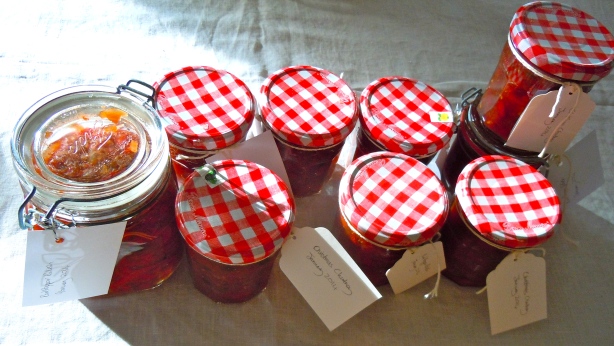 Their enthusiasm for cooking-from-scratch, sewing, knitting, gardening, and other domestic activities is the product of a range of factors (many of them explored in Emily Matchar’s Homeward Bound: Why Women are Embracing the New Domesticity (2013)). These include the evolution of feminism to reclaim work once dismissed as feminine and, thus, unimportant; a shift in values as Generation Y attempts to carve out new, meaningful forms of employment; and the 2008 financial crash. Austerity has played out culturally: in a new interest in mending and making-do.

Most obviously, a willingness to make ketchup and bread and mayonnaise is part of a backlash against Big Food: as revelations around, among other things, food contamination, the exploitation of workers, and cruelty to animals continue to emerge, there has been a gradual turning-away from processed food. This, though, is nothing new (there was a similar whole food movement in the 1970s), nor particularly prevalent beyond the affluent middle classes.

Unsurprisingly, this backlash against the readymade has been accompanied by a fascination for the post-war cooking which relied heavily on processed food. The Internet abounds with lists of appalling recipes containing instant jelly, fizzy soft drinks, and canned meat. Nigella Lawson devoted a section to ‘trashy’ food in Nigella Bites, explaining that she defines ‘trashy’ as any food relying on at least one readymade ingredient: Maryland cookies in her chocolate and lime cheesecake, for instance. 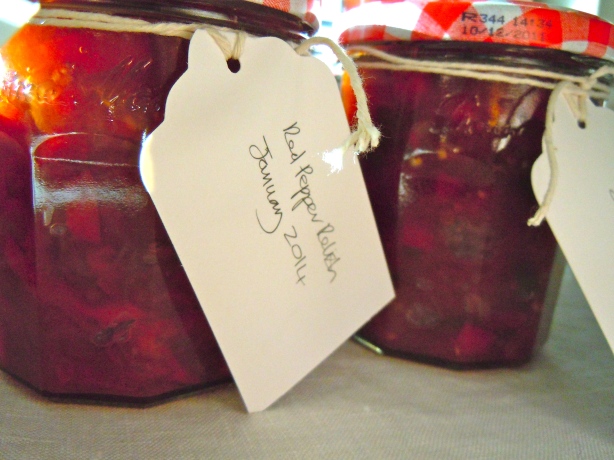 There is some justification for this ridicule – so many of these dishes range from the bizarre to the mildly pornographic. Adding lime jelly to tinned tuna, or turning Vienna sausages into fondue, suggests that some home economists employed by food companies in the 1950s and 1960s really did have cloth palates.

But it’s worth taking enthusiasm for the readymade seriously. In his excellent – and deeply funny – blog Caker Cooking, Brian Francis cooks his way through the community, school, and church recipe books constituted of the kind of everyday dishes made by, largely, middle-class families. (And although his blog is Canadian, I’ve encountered similar pamphlets and recipes in South Africa and Australia.) This is his definition of caker cooking (and he is being satirical, so his third point is not meant to offend):

1. A ‘magic’ ingredient. We cakers love to think we’ve discovered some sort of short cut. Usually, this short cut requires a can opener.
2. Ease. The recipe has to have as few steps and as few ingredients as possible.
3. Frugality. There’s nothing more wasteful than spending good money on food.

Indeed, it is for these reasons that processed food held such appeal to women – many of them entering the workplace in greater numbers – from the middle of the twentieth century to the present: that this food is quick and easy to prepare, and it’s cheap. It’s difficult to imagine, now, the amount of labour that used to go into the preparation of food. And, as the food writer and anti-poverty campaigner Jack Monroe has noted over and over again, tinned food is considerably cheaper than fresh.

Calvin Trillin is one of the few food writers who recognises that the only way of describing honestly about how people eat is to acknowledge that processed food is integral to the way most of us cook. (Try cooking through a winter without tinned tomatoes.) That cream of mushroom soup is a vital ingredient in so many distinctive regional dishes; that Texas barbeque is served with cheap, white processed bread and that’s ok.

My point is that however wonderful it is that there has been a rediscovery and re-embrace of old-fashioned forms of cookery – and as one who makes her own granola, bakes her own bread, and who has dried her own tomatoes, I am part of this too – this movement is small, and one limited to those who have the time and resources to spend hours making pickles or fruit leather. Instead of arguing for a wholesale rejection of all forms of processed food, what we should focus on is ensuring that it is better: that it is healthier, properly labelled, and produced in humane, fair conditions.

Just before Christmas, the Mount Nelson – Cape Town’s grandest hotel – caused a minor kerfuffle on social media after posting a photograph of its latest confection: a corrugated iron shack made out of gingerbread. When several people pointed out that this was, at best, a stunningly insensitive gesture, the hotel’s representative replied that its purpose was partly ‘educational’: that it was to ‘raise awareness’ among hotel guests, most of whom are foreign, of the Mount Nelson’s ‘township projects’. As the uproar grew, the hotel deleted the photograph, then denied deleting the photograph (arguing that it was trying to ‘control’ the outcry), and finally apologised – blaming the gingerbread house on a ‘staff initiative’. 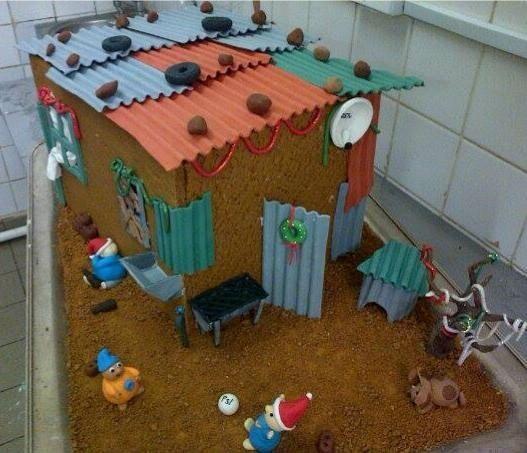 This is not the first – and will certainly not be the last – example of crass, thoughtless behaviour in the food world. A couple of years ago I attended part of a conference-cum-festival in the Cape Town City Hall where an installation attempted to impress on punters how many South Africans are illiterate, use latrines, are HIV positive, and are unemployed through the medium of cake decorations. (The same event included a talk on Nelson Mandela’s life understood through food, during which members of the audience were served versions of the meals that he ate at key moments…supplied by posh supermarket Woolworths.)

Earlier this year, a group of Hackney hipsters were forced to defend their decision to open an advice centre-themed café on the former site of the Asian Women’s Advisory Service. The Advisory – as it is called – seemed to many to crystallise all the worst aspects of the gentrification of one of London’s poorest boroughs.

The Advisory and that Cape Town food conference are the products of an industry dominated by the privileged. The Mount Nelson’s defence of its gingerbread house could only, I imagine, be made by someone who had never had to think too deeply about the circumstances which force people to live in informal settlements.

So far, so obvious. But I think it’s worth paying attention to the Mount Nelson debacle, in particular, because it draws our attention to the problematic ways in which the food industry – or the collective writers, broadcasters, restaurateurs and others involved in the food world – deals with race.

Recently, and most noticeably since Time’s disgraceful male-only list of the world’s top chefs, there has been a lot of excellent discussion about why women’s contribution to the food industry goes unnoticed. But we have to ask another question just as urgently: why is it that the majority of people usually listed as ‘top chefs’ (whatever we may mean by that) are white? Why is it that someone like David Chang is a notable exception in a long parade of white men?

It certainly isn’t the case that kitchens don’t employ black people. The report Fast Food, Poverty Wages: The Public Cost of Low Wage Jobs in the Fast Food Industry (2013), demonstrates not only that Americans employed in fast food jobs are more likely to live in poverty, but also that ‘[m]ore than two out of five front-line fast-food workers are African American (23 per cent) or Latino (20 per cent)’. More generally, the majority of people employed in low-paid, but essential, jobs over the extent of the food chain – from agricultural and abattoir work, to shelf packing and restaurant serving – and in the US and elsewhere, are people of colour.

The invisibility of this workforce in most food writing is indicative, I think, of the, often problematic, ways in which food writers deal with race. Food writing is one of the few genres where it’s still possible to describe Middle Eastern or south Asian food in terms which would keep the average eighteenth- or nineteenth-century orientalist happy.  This post on how to write about African food – inspired by Binyavanga Wainaina’s essay ‘How to Write about Africa’ – nails this:

It is best practice to include the word ‘Africa; plus a positive descriptor in your headline. If you must be more specific, whole regions like West Africa, Southern Africa, East Africa, West Africa or Central Africa will do. Always keep the headline of your article broad, even when writing about the food of a specific country.

Remind the reader that Africa is not a country, but still do not offer specifics.

Introduce the owner of the restaurant. If male, he moved to the country 10 years ago and learned to cook by working in the restaurant of a hotel. Another option is that he had no idea how to cook upon arrival and taught himself everything he knew after a bout of severe homesickness. His name is Chuck.

If female, she is a motherly figure who walks round greeting customers as if they were family. Think Mother Africa. She has a twinkle in her eye. She is plump. Everyone calls her Mama O.

Ask Chuck or Mama O why they chose to open a restaurant. Ask about the name of the restaurant and what it means.

Discuss the menu and gloss over the regular dishes… Focus on the most exotic-sounding foods.

Point out that Mama O brought out a knife and fork for you, but you endeavored to go ahead and eat with your hands. Mention that you cleared your plate. Don’t offer criticism.

My point is that the kind of bad food writing this post parodies, is indicative of a set of deeply concerning attitudes towards race: that Africans (or Asians, or South Americans…) conform to a set of exotic stereotypes that render them less fully human than the white, western writers who encounter them.  One of the effects of this writing – which has a tendency to describe all non-western food as ‘ethnic’, as if whiteness absolves one of ethnicity – is to draw attention away from the material circumstances in which Ethiopians, Iranians, and Mexicans, for example, actually go about producing food, either for themselves, or as immigrants in other societies.

Put another way, this food orientalism serves to depoliticise writing on food, and to distract from the inequalities and exploitation which occurs along the length of the food chain.