On 24 September, South Africans celebrate Heritage Day, during which they’re supposed to commemorate the rich and diverse cultural inheritance of the Rainbow Nation. That, at least, was the intention in 1996. Now, Heritage Day is a day of rallies and speeches organised by the government, or National Braai (Barbecue) Day – an initiative launched in 2007 to unite the nation in its shared enthusiasm for incinerating meat over wood fires.

Although there is something deeply ridiculous about a National Braai Day, there’s a logic in recasting Heritage Day into an uncomplicated, fun event which includes just about every South African. Not only did the then-Department of Arts, Culture, Science, and Technology include food as part of South Africa’s cultural heritage, but most South African cuisines include some form of barbecue. Everyone – from the middle classes in leafy suburbs, to township dwellers – can, and does, braai.

The originators of National Braai Day manage – probably unwittingly – to solve, or to negotiate, the deeply troubling question at the heart of Heritage Day: what on earth do we mean by ‘heritage’?

Like most historians, I find the idea of ‘heritage’ problematic – and particularly in societies, like South Africa, with long histories of nationalist politics. ‘Heritage’ is constructed: it’s what we – the state, and other institutions – select from the past, and what we choose to remember. Usually, we decide to remember those events and people who are useful for the construction of national identities. What we leave out of these narratives of national becoming is almost as important as what we decide to include.

Under apartheid, European explorers like Vasco da Gama, various early Dutch officials, Voortrekkers (pioneer farmers), Boer generals from the South African War, and nationalist politicians were immortalised on bank notes, in statues and monuments, and in thousands of street names. These white men – and some women – represented what the apartheid state defined as South Africa’s heritage – alongside events such as the Battle of Blood River, the songs in the FAK Sangbundel, volkspele (‘folk-games’), and some kinds of Afrikaans literature.

Those aspects of South African history which could not be mobilised in the construction of a narrative of the triumph of white, Afrikanerdom, were ignored. So there was no room for the miners’ strikes of the early decades of the twentieth century; the histories of the ‘hendsoppers’ and ‘joiners’ – Boers who surrendered to, or joined, the British army during the South African War; the implications of the 1913 Land Act for Africans; and the Bulhoek Massacre, for example.

Perhaps inevitably, the ANC has engaged in its own process of myth-making in post-apartheid South Africa, having claimed the 1976 Soweto uprising as its own event (in fact, the exiled ANC was completely taken by surprise by these student protests); interred Sara Baartman – a Khoi woman who toured Europe in various freak shows between 1810 and 1815, and who is now seen as an emblem of African suffering and exploitation under colonial rule – in a grave in the Eastern Cape, a region she probably never visited, but which is the heartland of the ANC; and has renamed airports, cities, and streets.

A couple of weeks ago I attended the annual Steve Biko Memorial Lecture at the University of Cape Town, presented this year by Ben Okri. Biko exemplifies what happens to difficult figures during processes of national myth-creation: as the originator of the Black Consciousness Movement and often critical of the ANC, Biko stands outside of the traditions, events, and movements which the ANC has used to create its version of a South African history. It’s telling that the ANC did not – to my knowledge – release a press statement on 12 September, the thirty-fifth anniversary of Biko’s death, and has done very little to transform him into a hero of the liberation struggle – as they’ve done with Sol Plaatje, for instance.

Although much of Okri’s speech was very, very bad – a woolly, rambling call for a national and nationalist renewal – I liked his opening point that we need to hold on to Biko’s ‘incisive’ questioning, and ‘forensic’ thought. It’s this kind of critical thinking which holds governments to account – particularly when they harness the past in the name of ‘heritage’ to prop up their claims to legitimacy.

One of the best examples of a thoughtful engagement with the pasts that we choose to remember is Jacob Dlamini’s Native Nostalgia (2009). In this memoir-cum-essay, Dlamini makes the – potentially uncomfortable – point that for all the viciousness of life in a township in apartheid South Africa during the 1970s and 1980s, black South Africans found ways of living – occasionally happily – under an oppressive regime.

He argues for remembering the strategies that people used to cope with the violence and discrimination of apartheid South Africa, suggesting that as we commemorate acts of resistance to the apartheid state, we should also remember the complex, ordinary lived experiences of the majority of South Africans.

As an historian and as someone who lived through the transition, I think that this is such an important point. Having been raised in a very politically aware household – both my parents were at various times engaged in anti-apartheid activities, and my mother was a Black Sash activist when I was little – I remember watching on television Nelson Mandela’s release from Victor Verster prison just a few kilometres from our house; shouting ‘vote yes!’ during the 1992 referendum; the riots after Chris Hani’s assassination in 1993; the bomb drills at school; frightening white men dressed in AWB uniforms driving through Paarl, where we lived until 1995 ; listening to radio announcers enumerating the numbers of people killed overnight in the Vaal Triangle, KwaZulu-Natal, and other flashpoints; and the alternating terror and euphoria of the 1994 election.

But it was when ordinary, everyday things began to change, that I realised the implications of the transition to democracy.

It’s difficult to describe the experience of being so isolated from the rest of the world as sanctions were introduced against South Africa during the 1970s and 1980s. As English-speaking opponents of apartheid, our family was doubly isolated – we didn’t have a large social circle in the small, conservative town where we lived.

One of the ways my parents coped with this isolation was through books and, particularly, magazines ordered from abroad. Our meals demonstrated particularly well how different we were from the conservative, white society around us, but also how isolated we were from the rest of the world. My mother cooked from Elizabeth David’s books, and also from Robert Carrier, the Supercook series, Good Housekeeping, and Katie Stewart’s recipes in Country Living. When my friends from school were eating lamb chops, rice, potatoes, and overcooked cabbage, we had paella, coq au vin, pasta in various forms, moussaka, and kofte. We drank proper coffee. We didn’t add Aromat to our food.

Making these dishes required some inventiveness: Arborio rice for risotto was almost impossible to find, and I can remember the first time I saw red peppers, mascarpone, ricotta, watercress, and couscous in the shops. My mother became adept at finding substitutes for the ingredients we couldn’t buy.

We have two thick recipe files at home – one for cakes and puddings, and the other for everything else. They comprise clippings from magazines and newspapers – Fairlady, the Financial Times – as well as recipes from friends, including my great-aunt’s amazing vinegar pudding, and, more recently, print-outs from blogs. Some of the recipes are older than I am, and we keep adding recipe cards, torn-out pages from magazines, and bits and pieces from the internet. These files – eccentrically categorised by my sister – are a record of my family’s experience of the past thirty or forty years: they’re a catalogue of our heritage. 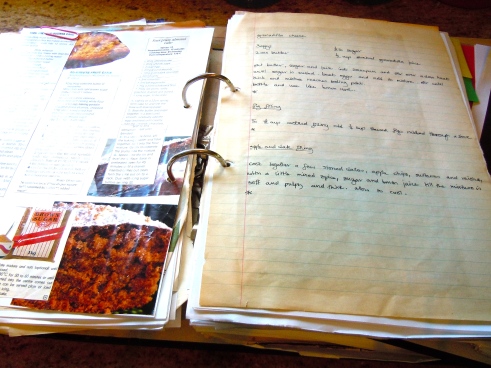 They don’t, though, fit into the narratives of national becoming pedalled by the government and, even, the organisers of National Braai Day. What’s missing – among many things – in our Heritage Day celebrations is an acknowledgement of ordinary, lived experience under apartheid – of the multiple ways South Africans adjusted to living under an oppressive regime.