I’m convinced that one of the reasons I became a historian was early exposure to the Indiana Jones films. (For all non-academics, they’re the best and most accurate depiction of academia in any cultural medium ever.)* My favourite remains Indiana Jones and the Temple of Doom – surely the greatest film ever made – and particularly for the bizarre and appalling feast to which Jones and his sidekicks are subjected at the Pankot Palace. I watched it again last night:

There are, of course, enormous problems with the film: it was banned in India for its depiction of Indians and Hinduism, and it can hardly be credited for providing an accurate portrayal of the subcontinent’s colonial politics during the 1930s. For me, the film’s campness and cartoonishness save it – like Tintin, it is barely on nodding acquaintance with reality.

But it does offer a useful way of understanding the relationship between food and colonialism during the nineteenth and twentieth centuries. The Pankot Palace feast is inedibly disgusting: from ‘Snake Surprise’ (a python slit open to reveal writhing, live snakes) and giant scarab beetles, to eyeball soup and monkey brains for pudding.

The scene cuts between our heroine’s increasingly panicked response to the meal and a tense, yet polite conversation between Jones, a British officer, and the juvenile Maharajah’s smoothly suave Prime Minister. Jones raises the question of the implications of the Kali-worshipping Thuggee (yes, really) cult for the local villagers – something which he argues is a greater threat to British rule in that region of India than was the 1857 Rebellion. 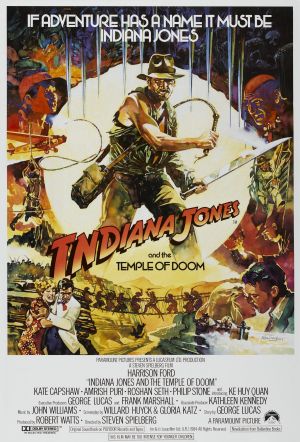 It’s all utterly ridiculous, obviously, but the film’s point is that the Palace’s enthusiasm for human sacrifice and the enslavement of children – we later see that the Maharajah’s wealth is mined by thousands of shackled child labourers – is linked in some way to its appalling eating habits.

For nineteenth- and twentieth-century colonialists such a view would have made perfect sense. During this period, British imperialism was justified, increasingly, on the grounds that it brought the light of civilisation to the dark and frightening jungles and deserts of Africa and Asia. (The residents of these jungles and deserts – these communities, nations, and empires – begged to differ on this point, but their views were hardly deemed important at the time.) This ‘civilising mission’ empowered imperial agents, from officials to missionaries, to ‘civilise’ colonial subjects.

Importantly, this process extended beyond conversion to Christianity and – for boys, at least – education. The domestic space was a key site for the creation of civilised subjects. In Britain, the home was a marker of respectability: the furnishings, cleanliness, and efficient running of the home by servants were all signs of a family’s good morals. Food and dining helped to establish class status as well.

For missionaries attempting to civilise colonial subjects, living in the right way was as important as thinking in the right way. Converts were encouraged to wear Western dress, live in square – not round – houses, and adopt British eating habits. Not only were they to eat three meals a day, but these were to be modelled, as far as possible, on what the middle class would have eaten in Britain, using British ingredients and British recipes.

In her study of missionaries working in the Belgian Congo, Nancy Rose Hunt argues that the progress of the Congolese living on the mission station was measured in terms of their willingness to swop local dishes for steak and kidney pudding, rissoles, and fruit cake. She notes the ‘evolutionary theme[s]’ evoked by the missionaries to emphasise the progress of their protégés, from ‘darkness to lightness, savagery to civilisation, heathens to Christians, monkey stew to roast beef.’ Roast beef is on the same side as Christianity and civilisation, assuming, thus, a moral value.

This discourse around civilisation, domesticity, and eating exercised an enormous effect on the lives of colonised peoples. Such was its strength that settlers in India and Britain’s African colonies insisted upon eating versions of familiar dishes – despite the differences in climate and available ingredients. EM Forster wrote in A Passage to India (1924):

the menu was: Julienne soup full of bullety bottled peas, pseudo-cottage bread, fish full of branching bones, pretending to be plaice, more bottled peas with the cutlets, trifle, sardines on toast: the menu of Anglo-India. A dish might be added or subtracted as one rose or fell in the official scale, the peas might rattle less or more, the sardines and the vermouth be imported by a different firm, but the tradition remained: the food of exiles, cooked by servants who did not understand it.

The new, educated middle classes in Africa ate British-style food to signify their civilised, sophisticated status. In Nervous Conditions (1988), Tsitsi Dangarembga uses food to illustrate the differences between Tambudzai – the slightly educated young daughter of a large, poor family in rural Zimbabwe – and the middle-class, British-educated aunt and uncle with whom she lives to go to school. Her aunt offers her a spoon and a mound of sadza when she has difficulty eating a ‘western’ meal using a knife and fork. Tambudzai is amazed by the cake, biscuits, and jam she is offered at teatime – all luxuries at her parents’ homestead. Accustomed to drinking from an enamel mug, she misjudges the heat of her tea in the china teacup and burns her mouth. Food plays a vital role in her transition from ‘peasant’ to ‘a clean, well-groomed, genteel self.’

This was, then, a powerful discourse. However strange and illogical this narrative about food, civilisation, and identity may seem to us, similar narratives continue to be constructed by many Westerners to understand Africa, and their relationship with a continent whose complexity and diversity they can’t – or won’t – seem to understand.

In the current narratives about the continent, Africans are depicted either as innocent, perpetually suffering victims or as vicious, murdering monsters. The success – if that is to be measured by the number of times a video is watched on YouTube – of the extraordinarily misguided Kony 2012 campaign demonstrates the extent to which people consider these narratives to be true.

This annoys me, both as an African and as someone who believes strongly that in the age of Google, ignorance of a whole continent is totally unacceptable and inexcusable. Moreover, there is plenty of evidence to suggest that this stereotyping has an impact on American and, to some extent, European policy towards the continent. Tracing a shift in American attitudes towards Africa from around 2000, when concern about the AIDS epidemic was at its height, Kathryn Mathers writes:

Suddenly there were no conversations about new democracies in Africa, or investment opportunities; the potential consumers were represented as too sick to labour, let alone to shop. This became the burden of caring Americans whose consumption practices can give a sick child in Africa ARVs or provide mosquito nets against the ravages of malaria.

It’s for this reason that she is so critical of the reporting done by Nicholas Kristof on Africa. Kristof, a popular New York Times journalist, has the power to shape American attitudes towards the continent. But he tells a story which persistently denies the agency of Africans:

This model does not question the causes of poverty, either general or specific, for the people it is meant to help. It does not pay attention to what people are doing for themselves or ask what they need. It is founded on a story that treats people as if they were just part of a natural landscape washed ashore by forces that aid agencies do not participate in or have any control over. It offers solutions, often expensive and technological, and therefore measurable, that inevitably cannot be sustained or make any genuine long term change in the lives of poor people around the world.

There is very little difference between Kristof’s view of Africa and that of nineteenth-century missionaries: the continent – populated by suffering and poweless, but essentially angelic, women and children – is the white man’s burden.

So what are the implications of such simple, and incorrect, narratives about Africa? Alex de Waal suggests that the attention that Kony 2012 drew to Uganda and the Lord’s Resistance Army may well detract from more nuanced and better targeted policy making around Africa. In an analysis of how three discourses have impacted on foreign intervention in the Democratic Republic of Congo, Séverine Autesserre writes:

The dominant narratives have oriented international programmes on the ground toward three main goals – regulating trade of minerals, providing care to victims of sexual violence, and helping the state extend its authority – at the expense of all the other necessary measures, such as resolving land conflict, promoting inter-community reconciliation, jump-starting economic development, ensuring that state authorities respect human rights, and fighting corruption.

Even worse, because of these exclusive focuses, the international efforts have exacerbated the problems that they aimed to combat: the attempts to control the exploitation of resources have enabled armed groups to strengthen their control over mines; the disproportionate attention to sexual violence has raised the status of sexual abuse to an effective bargaining tool for combatants; and the state reconstruction programmes have boosted the capacity of an authoritarian regime to oppress its population.

This has profound implications for dealing with famine and food shortages in parts of Africa as well. Johan Swinnen and Pasquamaria Squicciarini point out that NGOs, think tanks, and policy makers need to think through the implications of the recent spike in the price of food for food security. Making the point that while high food prices increase the likelihood of poor people going hungry, they also benefit poor farmers, Swinnen and Squicciarini demonstrate that as recently as 2005, Oxfam and the Food and Agriculture Organisation were blaming low food prices for hunger. They write: ‘it can be hard to find a relation between underlying analytical work and the policy messages sent by communications departments.’

The problem with an approach which argues that only one factor – like food prices – causes hunger is that it can actually worsen the situation. For instance, consistently advocating an end to import tariffs and export subsidies in rich countries – ostensibly to benefit farmers in poor countries – could actually cause the price of food to increase.

The recent announcement that one billion people are hungry is equally problematic. Not only have these statistics been queried, but they ignore the fact that ‘[n]ew studies suggest that the number of hungry may have declined, possibly by many millions, despite the food price increase.’ This simple narrative about hunger and povety – which slots into pre-existing notions about the helpless African poor – actually undermines further investigation into the complex causes of hunger.

So why the disconnect between policy and research? Swinnen and Squicciarini suggest that in order to raise funds and to influence governments, NGOs tend to use – rather than challenge – the narratives offered by the media on poverty, Africa, and food security.

This is why stories and narratives are so dangerous. As Swinnen and Squicciarini conclude:

If the objective is to assist those who are hurt by price changes, this is no excuse for simplistic messages.