Is hunger the real reason for the North Korea crisis?

Why modern chicken tastes of nothing.

The reason for the collapse of the soda ban in New York.

The GM salmon farms of … Panama.

How much people in different countries spend on food.

The poor treatment of waiters and waitresses.

A map of food deserts in the US.

How bad is steak for you?

The Paleo Diet is nonsense.

The rising popularity of hummus in the US.

Close reading a slogan for crisps.

A day in the life of Alidoro’s, a deli in New York.

Supper on the farm, in Sicily.

A colour guide to beers.

How to reverse engineer the McDonald’s Fillet-o-Fish.

Save the world – don’t use chopsticks.

A world map of flavours.

The story behind Sriracha.

Why cannibalism was a sensible choice.

A fortnight ago my mother and I devoted a day to our annual chutney making, and we spent the evening recovering from the inhalation of vinegar fumes, in front of the television. We watched the first episode of the new series of Nigel Slater’s Simple Suppers. Being fans of Slater’s recipe books, we had high hopes, but these began to crumble when he remarked conspiratorially to the camera that ‘some people buy jars of pesto.’

We groaned. Of course, pesto out of a bottle is never going to be quite as amazing as pesto made freshly. (I’m not going to wade into the tiresome debate over whether pesto made in a food processor is better than that made with a pestle and mortar.) But it’s fine. Really: for a quick, warming supper, it’s absolutely delicious. And, as my father pointed out as he walked past to switch the kettle on, it’s great to be able to support businesses which train people and provide employment.

As an antidote to Slater’s preciousness, I read a couple of Calvin Trillin’s essays from Eating with the Pilgrims, a collection published in Penguin’s newish Great Food series (the one with the beautiful covers). Although he’s also a poet and journalist, Trillin is probably best known for his food writing in the New Yorker. His writing is clear, clever, and deeply sympathetic to others who, like him, love eating. Trillin tends not to write about food itself, but, rather about how people think about it, as he remarked in an interview: ‘I’m not interested in finding the best chilli restaurant in Cincinnati. I’m interested in Cincinnatians fighting about who has the best chilli.’ 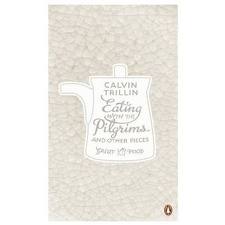 What I like about Trillin is that he writes about buffalo wings and barbeque with the same seriousness that other writers devote to stilton or cassoulet:

The sort of eating I’ve always been interested in is what I guess you’d call vernacular eating. It has something to do with a place. Buffalo chicken wings have something to do with Buffalo. The fact that people in Cincinnati have something they call authentic Cincinnati chilli, and seem unaware that people in the Southwest eat chilli, let alone Mexicans, and think that chilli is made by Macedonians and served on spaghetti, that’s interesting to me. Whether Skyline chilli is better than Empress chilli I don’t really care about.

This is Trillin on fried chicken:

Because a superior fried-chicken restaurant is often the institutional extension of a single chicken-obsessed woman, I realize that, like a good secondhand bookstore or a bad South American dictatorship, it is not easily passed down intact. Still, in sullen moments I blame these lamentable closings on the agribusiness corporations’ vertical integration of the broiler industry. In fact, in sullen moments I blame almost everything on the vertical integration of the broiler industry – the way some people trace practically any sort of mischief or natural disaster back to the Central Intelligence Agency, and some people, presumably slightly more sophisticated, blame everything on the interstate-highway program. If the civilisation really is about to crumble, everybody is entitled to his own idea of which is the most significant crack. Which brings us to Kentucky Fried Chicken.

I urge you to read Trillin’s excellent cultural history of buffalo wings and his fantastic account of seeking the best barbequed mutton in Kentucky. My favourite essay, other than his celebration of Shopsin’s, the legendary-despite-its-best-efforts New York restaurant, is about boudin, a staple of Cajun cuisine which is, in its purest form, a kind of sausage made out of pork meat, rice, and liver. (I wish I could provide a link, but the New Yorker has an unfriendly unwillingness to open up its archives.)

These are not particularly sophisticated dishes, and they’re often produced with a heavy reliance on processed foods – pre-packaged seasonings, the inevitable Campbell’s mushroom soup – whose flavours become as important to the finished product as those elements which make boudin or buffalo wings unique. In fact, in between Slater’s snobbery and Trillin’s celebration of deliciousness is a useful way of thinking about what we mean by processed food.

We know that the cheapness and easy availability of processed food has been blamed, rightly, for facilitating a global obesity epidemic. (Even if the increasing prevalence of obesity can’t logically be described as an ‘epidemic’. Obesity isn’t really catching.) High in salt, preservatives, and calories, most processed food provides eaters with meals which are temporarily filling and satisfying, but without much beneficial nutritional content. In food deserts – areas where low incomes, and poor transport infrastructure and distribution networks make access to fresh food very difficult – it’s usually only processed food which is available at corner shops and discount supermarkets.

But, technically, most food that we eat – even ‘good’ food – is processed. I know that blogs have been criticised for simply listing the contents of bloggers’ fridges, but I’m doing this for a reason: with the exception of the eggs, lettuce, leeks, herbs, and cherries in my fridge, the rest of it is processed. This includes the milk and cream (nearly all dairy products are pasteurised and homogenised before they’re sold to the public), blackberry jam, sun dried tomatoes (laugh if you must), butter, Colman’s and Pommery mustard, mum’s and Mrs Ball’s chutney, salami, tomato paste, and the tube of sweetened chestnut puree.

By ‘processed food’ we mean food that is prepared in some way before it’s sold: from the most severely limited run of cured hams, to the strangest possible non-food imaginable. So it’s not all bad. In fact, I’m not sure that most of us would cope without processed food of some variety: I can’t buy raw milk in Cape Town, and I rely on tinned tomatoes and frozen peas. I am not about to make my own couscous, or knit my own yogurt, despite being politically left-wing.

We do, though, eat more processed food than ever before. Since the beginning of the nineteenth century as food production became increasingly industrialised, first in the United States and then in the rest of the world, our diets have changed. We eat more of those products which are difficult or time-consuming to prepare at home (bread, pasta), and mass production has made formerly expensive, ‘artisan’ items (Parmesan cheese, chocolate) cheaper and more readily available.

I think that that one of the reasons why I was surprised by Slater’s snobbery was because of the lengthy and often quite nostalgic descriptions of the processed food of the 1960s in his memoir Toast. We tend to associate the rise of processed food with the post-war boom: with bizarre recipes for spam fritters, and a hundred and one ways with Angel Delight. In the modernist 1950s, this was the sophisticated food of the future – the food of the newly prosperous middle classes. Michael Pollan remembers:

The general consensus seemed to be that ‘food’ – a word that was already beginning to sound old-fashioned – was destined to break its surly bonds to Nature, float free of agriculture and hitch its future to Technology. If not literally served in a pill, the meal of the future would be fabricated ‘in the laboratory out of a wide variety of materials,’ as one contemporary food historian predicted, including not only algae and soybeans but also petrochemicals. Protein would be extracted directly from fuel oil and then ‘spun and woven into “animal” muscle – long wrist-thick tubes of “fillet steak.”‘

By 1965, we were well on our way to the synthetic food future. Already the eating of readily identifiable plant and animal species was beginning to feel somewhat recherche, as food technologists came forth with one shiny new product after another: Cool Whip, the Pop-Tart, nondairy creamer, Kool-Aid, Carnation Instant Breakfast and a whole slew of eerily indestructible baked goods (Wonder Bread and Twinkies being only the most famous).

The appeal of cake mixes, tinned macaroni cheese, and, later, boil-in-the-bag meals was that these were quick, labour-saving dinners. As middle-class women entered the workforce in ever-increasing numbers, so eating habits adapted to new work patterns.

The backlash against processed food and industrialised agriculture of the 1970s – in the United States, the largely California-based counter-cuisine, for example – associated the mass production of food with environmental destruction and social inequality. (Poorer people tend to eat the worst processed food.) We’ve since begun to associate the idea of processed food with strange non-foods – with turkey twizzlers and cheese strings – rather than think of it as food which has been prepared in some way, and usually in large quantities, before being sold.

I know that this may seem like a fairly nitpicky point, but we need to acknowledge the extent to which we rely on processed food in order to feed ourselves. Most of us eat better and a greater variety of things because of the mass production of food. To my mind, the more pertinent question is not how we should prevent people from eating processed food, but, rather, how we can make this food better and healthier. Obviously, we need to teach people how to cook healthily – and we have to consider the relationship between eating patterns and the hours that people work. Middle-class foodies and other well-meaning campaigners around nutrition must realise that their anti-processed food stance is not only a kind of snobbery, but entirely impractical.