The massive and widespread corruption preventing the poor from getting fed in India.

The growth in demand for food banks in Britain.

A victory for the Fair Food Programme.

How nutritious are organic products?

A blog which fact-checks Michael Pollan.

What scientists eat in Antarctica. (Thanks, Lize-Marie!)

Ale to the Chief.

Severely calorie-restricted diets don’t prolong life. And what it’s like to exist on such a diet.

An interview with Yotam Ottolenghi.

When did cooking become so pretentious?

Unravelling the mystery of a lost ravioli recipe.

How to save money at lunchtime.

The return of lard?

How to write with chocolate.

Why bacon mania has gone too far.

The best pastry shops in Paris.

Bubble tea may be carcinogenic.

Raj Patel on the banking industry’s long history of profiting from drought.

Glencore admits that the US drought is good for business.

What are the health implications of farmers’ use of vaccines on their animals?

The end of the low-fat fad.

Cars, supermarkets, and feeding the city.

The world’s hottest chilli seems to be offering some Indian farmers a route out of poverty.

How the brain creates flavour.

Vegetables in exchange for recycling?

What will we be eating in twenty years? (Thanks, Inna!)

Photographs of the first coffee shop in Khayelitsha.

Learning how to eat in South Korea.

A review of Jenny Rosenstrach’s Dinner: A Love Story.

Feuding in the Greek yogurt industry.

A guide to Afghan food.

The rise of the food paparazzi.

David Simon on food, eating, and his father.

The world’s best edible coffee cup: made out of cookie.

The Middle Class Handbook on prosecco.

On running a bakery in Portland, Oregan.

You can never have too many blackberries.

The New York Times on where to eat in…Brixton.

A blog for waiters, waitresses, and those who do the serving in restaurants.

How to make your own mustard.

How to make chocolate fondue.

The rise of the doughnut.

How waiters make punters part with their money.

These are courtesy of my Mum:

Odd things to do with watermelons.

So who invented bubble tea?

How climate change is transforming the wine industry in the Old World.

How agriculture and the food industry are responding to Ireland’s high levels of unemployment.

END_OF_DOCUMENT_TOKEN_TO_BE_REPLACED

I’ve an article in the Christmas edition of the amazing Fire and Knives (this is Tim Hayward, its editor, deep-frying a turkey). In Cape Town, Fire and Knives is available at The President.

The Canadian Supreme Court rules that cheese must contain milk. Which is nice.

The Thanksgiving meal in pill form. (Thanks Mum!)

Some thoughts on the history of cake.

A food adventure in Detroit.

A chef takes a swipe at restaurant reviewers.

How to make mustard at home.

The myth of ‘use-by’ dates.

How safe is silicone bakeware?

Community food enterprises – the model of the future?

Like many people, I spent this week glued to the news, following the riots in Britain. I have friends who live in the parts of London which witnessed some of the worst violence, and I was stunned how areas of London I know and love – areas which I think of as home – were transformed by the rioting and looting. Even Bloomsbury was not left unscathed: Gay’s the Word in Marchmont Street, one of the most beloved bookstores in London, had its windows smashed, rather undermining claims that the looters tended to leave book shops alone. (And such a pity they missed Alain de Botton’s daft School of Life next door.) 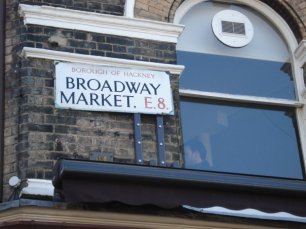 So when I read on Twitter that Broadway Market was a potential target for the rioters, my heart sank. When I moved to London to begin my PhD, I remapped the city according to the destinations I most loved: book shops, art galleries (so that was central London, South Kensington, Pimlico, the south bank, Whitechapel, and Dulwich sorted), and places to eat. I did this because I have a comically bad sense of direction. During a holiday in Ireland a few years ago, my friend Carina realised quickly that the best way of discovering the correct direction to walk in, was to go in the opposite way I suggested. If I turned left, it was almost certainly the case that we should have gone right.

Guided partly by the London Farmers’ Markets website, I came to know London through its markets, delis, and kitchen and food shops. I walked all the way to Notting Hill from Bloomsbury once (map-reading has never been a strength) and, disappointed by that farmers’ market, spent the morning at Books for Cooks and discovered possibly the best culinary invention in the history of humanity at a local deli: glass jars containing crème de marrons and vanilla-flavoured yogurt. When Charles Saatchi (re-)opened his gallery in the Duke of York’s Building, it gave me another reason to visit that part of Sloaney London: Partridges also sells those crème de marrons-and-yogurt concoctions (admittedly for £1.50 each, but with all that yogurt they’re practically health food).

If I was feeling uninspired on Saturday mornings, I would walk to the inevitable Borough Market through the eerily silent City, and buy coffee from Monmouth and a bacon roll – easy on the mustard, heavy on the brown sauce – and watch the stall holders set up before the tourist hordes arrived.

But my favourite parts of the city were further east. Broadway Market, near London Fields, trades on a stretch of road which has been used by merchants and travellers for around a thousand years. It’s ancient and at the same time, emblematic of the regeneration of Hackney, London’s poorest borough, but also, arguably, its most socially diverse. On Sundays it was a long walk through Clerkenwell, Old Street, Shoreditch, and Bethnal Green for breakfast at Columbia Road Flower Market – with coffee bought from what must be the city’s smallest coffee shop – a splurge at the second hand bookshop, and an attempt not to knock over any plants (I once caused, accidentally, an avalanche of Christmas trees).

My other guide was sent to me by my mother: the fantastic London Review of Breakfasts. It’s a website which takes breakfast Very Seriously Indeed. Listing cafes, greasy spoons, and restaurants from all over London, it considers not only what these establishments serve and how they go about doing this, but why. What I like about it most – other than its understanding of the psychologically restorative nature of breakfast – is its anti-snobbery.  Bermondsey’s Cat and Cucumber is given higher – and deserving – praise for its breakfast, than the branch of Whole Foods in Kensington:

It just doesn’t feel organic in the way I understand it. And frankly neither do any of the 26 varieties of killer tomatoes on sale, particularly the insipid orb that is part of my tepid, refectory-style ‘English Breakfast; on the first floor. The rest of this dry, fatty, Americanised assembly – grey-green scrambled eggs, semi-raw sausage, bacon jerky, white toast (‘no brown available’! In the temple of choice!) – requires five separate squirts of ketchup to render it edible. It is pathetic. 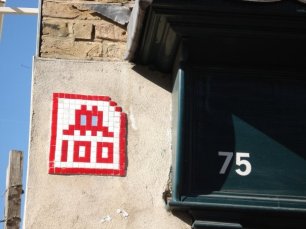 No other collection of reviews is this relentlessly entertaining. My favourite remains of the Euphorium Bakery in Islington:

you started to tremble and had to content yourself with an egg mayonnaise sandwich on thick brown bread. It would have been an eggy, creamy delight, I think, if there had been any filling to delight in. But alas, a mere smear across the bread, a hint of a yolk and a whiff of white was all that was present. We wept. I craved a sympathetic glance from the staff. They were oblivious to our pain and announced that “that was how they made their sandwiches”. How they let themselves down. How they let us down. The pastries so perfect. The sandwiches so disappointing. My fan dropped to the floor, you rose from your chair, nearly careering into one of the many mothers with babies as you hastened to exit.

‘Pierre!’ I shouted, ‘Don’t leave me! I will make you an egg sandwich wearing nothing but a silk negligee whilst I recite passages from Voltaire!’

In short, the London Review of Breakfasts sets a standard not only for eating breakfast, but for living. 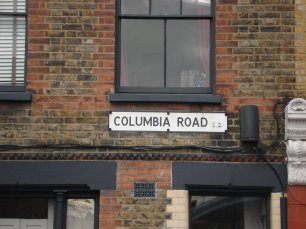 It’s particularly fitting that this website devoted to breakfast should be based in London. We know that mass urbanisation at the beginning of the nineteenth century caused changes in people’s behaviour. Quite simply, people lived and behaved differently in cities – where most of them were crammed into tenements and slums – than they did in the countryside. This change was caused overwhelmingly by the fact that the nature of work altered during the 1800s. Cities grew as a result of industrialisation. Factory employees, as well as the office workers who staffed the businesses that serviced these new industrial economies, worked longer and more regular hours than ever before.

In a predominantly agrarian society, work is determined by the weather and is seasonal – hours tend to be longer in summer than in winter, for example. In the factories and offices of Victorian Britain, the clock – and then laws governing how long people were allowed to work – ruled the working day, something Dickens satirised in Hard Times. Work began promptly at around seven or eight o’clock, and continued without stopping until the evening. Gas lamps and, later, electricity, meant that work could go on regardless of when the sun rose or set. Work was decoupled from nature. 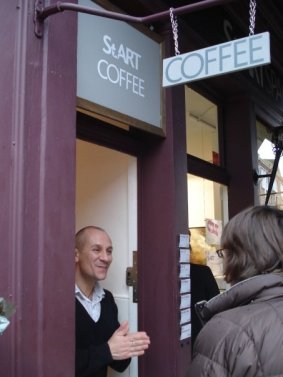 The tiny coffee shop at the Columbia Road Flower Market

One of the first aspects of people’s lives to change as a result of these new working patterns was how they ate. In Britain, up until the early nineteenth century, most people ate a substantial breakfast at around ten or eleven o’clock (what we’d now refer to as brunch), and then dinner, the main meal of the day, in the mid-afternoon. In the evening, before they went to bed, they’d have tea with biscuits or a light snack. Supper was a late, savoury meal eaten by the wealthy, and usually after an evening’s entertainment.

With the coming of industrialisation, mealtimes changed and particularly according to the kind of work people performed. For the urban middle classes, dinner moved later into the day, partly as an indicator of the fact that they were wealthy enough to afford candles, gas, or electricity to light the meal. Luncheon and afternoon tea, served with cake and sandwiches, emerged to fill the long gap between breakfast and dinner. Further down the social scale, tea, served at the end of the working day, frequently replaced dinner. This tea – referred to as ‘high tea’ or ‘meat tea’ – included protein, usually potted meat or smoked fish, to assuage the hunger pangs of tired labourers.

The strange British snobbery around the names of mealtimes emerges from this period: it’s upper- and middle-class to refer to breakfast, lunch, and dinner (or supper), and lower-middle- and working-class to say breakfast, dinner, and tea. Breakfast, though, changed in the same way for workers of all kinds: it was eaten earlier in the 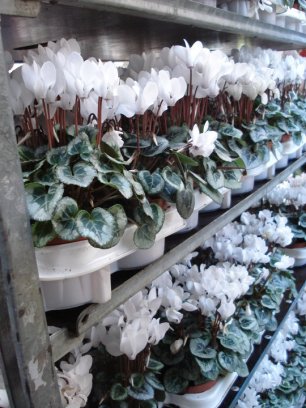 Our eating habits are still evolving – and they’ll continue doing so, particularly as urbanisation continues. It’s estimated that seventy per cent of the world’s population will live in cities by 2050, and we know that this will have massive implications for how we live: from the way in which we plan our cities, to how we eat. It’s not simply a case that our food systems will have to accommodate the fact that food will have to travel further – or will need to be grown in cities – to feed us all, but our working patterns will change too. What and how we eat cannot be disentangled from where we live.