The launch of the Global Food Security Index.

How the size of fizzy drinks has increased in the US.

The rise of ‘single estate milk‘ in Ireland.

The cost of coffee.

Why British dairy farmers are protesting at a drop in the price of milk.

How Kraft tests its products on children. (Thanks, David!)

Fake meat comes ever closer to being a reality.

No chips other than McDonald’s chips are to be allowed in the Olympic park. Madness.

The politics of free milk.

The worryingly high incidence of bisphenol A in humans.

A riposte to ‘self-righteous vegetarianism.’

What criticism of fast food says about our relationship with food.

An interview with Jay Rayner.

A lovely article about Escape Caffe in Cape Town.

On the continuing success of Coca-Cola.

A girl and her pig.

Hints and tips for dining etiquette.

Fuchsia Dunlop on the pungent cuisine of Shaoxing (and more pictures here).

A guide to Greek cooking.

The Coalition against Brunch.

Five of the best trattorias in Rome.

Margarine and fizzy drinks. (Thanks Dan!)

How to get people to shop for groceries in the nude.

The trend for bitters in cocktails.

Recipes for blueberries. (Thanks, Simon!)

Supermarkets and the threat to the Amazon. (Thanks, David!)

Are all calories the same?

How to chop an onion.

The history of the fork.

Can food photography make you hungry?

Japan rethinks its relationship with food. (Thanks, Mum!)

How to eat cheese and biscuits.

A poem about olives.

Why wasting food is bad for the environment.

The Cake Museum in Los Angeles is under threat.

How cupcakes may save NASA. (Thanks, Jane-Anne!)

From Customers to Consumers

I love this video – it’s an overview of a century of fashion, music, and dance in London’s East End:

It’s not an art installation. It’s not part of a community project. It’s an ad. For a shopping mall. And this isn’t any mall – it’s Europe’s biggest, and one of the key developments in the Olympic site in Stratford. In fact, it seems that most of the spectators attending next year’s Summer Olympics will enter the games through Westfield Stratford City: its casino, 300 shops, 50 restaurants, three hotels, and 17 cinema screens.

I’m not a massive fan of shopping malls, and said as much when I posted this video on Facebook. And then my friend Jean-François, who’s an architect, made the point that the development will create a massive 10,000 jobs, and has funded literacy classes for the astonishingly high number of applicants who seemed to be illiterate. In an area as deprived as Stratford, surely this shopping centre could only be a Good Thing?

There has been a great deal of criticism of the way in which Stratford has been transformed by the Olympic site. I don’t want to romanticise life in a very poor borough of London, and I’m not sure that commentators like Iain Sinclair – who has been vociferous in his opposition to the 2012 Olympic bid – offer much in the way of ideas for providing jobs, decent housing, and education for the area. But I feel uncomfortable about the way that a temple to consumerism seems to be offered up as the only possible way of raising living standards in Stratford. As Suzanne Moore – not, admittedly, my favourite columnist – wrote in yesterday’s Guardian:

Next week a new Westfield opens. It’s not in west London, it’s in the east, in Stratford. It will cash in on the Olympics. Is this what this deprived area really needs? Another giant, weatherless mall that has exactly the same shops as everywhere else? Maybe this deliberately disorientating social space will be a place of connection and hope. Maybe it will offer the local youth something other than an expensive bowling alley, a multiplex and some minimum-wage jobs.

But is this just a case of lefty, middle-class squeamishness? When I buy a Margot Molyneux blouse from Mungo & Jemima, or even a dress from an upmarket chain like White Stuff or online store like Toast, it’s not any ‘better’ than purchasing a t-shirt from Mr Price. Both decisions support people who designed and made the garment. When I buy from small, local grocers and food shops, it’s partly because of a belief that this is good for our food system, but it also says something about me – about how I choose to constitute my identity in relation to a particular way of thinking about being an ‘ethical’ shopper. However critical I may be of consumerism, I am, inevitably, bound up in it.

I am interested in the shift from defining people who buy things from shops as ‘customers’ to being described as ‘consumers’. There’s a growing collection of historians interested in tracing and analysing this transition. One of the reasons why I’m so interested in it is because of the pivotal role played by the food industry in creating consumers.

Given the dire state of the average American diet, it probably comes as no surprise to learn that the United States was the first country to witness the rise of a food industry reliant on consumers who had begun to buy an increasing number of good produced in factories by big food companies towards the end of nineteenth century. Consumerism is inextricably linked to the industrialisation of food production.

The first people to benefit from the Industrial Revolution were the middle classes. In Britain, Europe, America and elsewhere, the newly-wealthy bourgeoisie could afford to buy more food, and employed more servants to prepare it. They had leisure in which to enjoy the eating of this food – and it became a way of marking newly-acquired middle-class status.

Until 1850 in Europe, and 1830 in the US, the diets of the urban poor actually deteriorated. The average height of working-class people living in the rapidly expanding cities of the industrialised world actually declined – one of the most potent indicators of the levels of deprivation experienced by this new proletariat. This was the first generation of workers to be disconnected from food production: these were people who no longer grew their own food, and were dependent on inadequate and expensive food systems to supply towns and cities. Poor diets were centred around starches and cheap, poor-quality food.

But from the mid-nineteenth century onwards, food became progressively cheaper, more plentiful, and varied – and this happened earlier and more quickly in the United States. So what caused this drop in price and greater availibility in cities? A revolution in transport made it easier to take produce from farms to urban depots by rail, and shipping brought exotic fruit and vegetables from the rest of the world to Europe and the United States. When Europe’s grain harvest failed during the 1870s, the continent was fed with wheat imported by steam ship from Canada. Farmers now began to cultivate land which had previously been believed to be inaccessible – and to grow market-oriented produce. The rise of the iceberg lettuce – which could cope with being transported over vast distances with little bruising – is directly attributable to this.

The agricultural revolution of the eighteenth century made farming more productive. New systems of crop rotation, the use of higher-yielding plant hybrids and improved implements, and the enclosure movement in Britain meant that fewer farmers were producing more food than ever before. And this produce was processed far more quickly, and cheaply. With innovations in the preservation of food through refrigeration, bottling, and canning, food could be transported over greater distances, but also, and crucially, manufactured in larger quantities and then kept before distribution on a mass scale.

Food companies began to control nearly every aspect of the newly industrialised food chain: businesses like Heinz formed alliances with farmers and transportation companies which supplied their factories with meat, fruit, and vegetables. Increasingly, they also began to advertise their products. The rise of these ‘food processors’, as they’re often called, caused a fundamental change in the way in which people ate. Most Americans began to eat similar diets based around processed food produced in factories.

Americans weren’t, of course, compelled to eat processed food. They did so for a number of reasons. Factory-baked bread, tinned vegetables, and processed meat were cheap, easy to prepare, and, importantly, believed to be free from contamination and disease. But with most people’s basic nutritional and calorific needs now met, food processors began to use advertising and brands to a far greater extent to encourage customers – dubbed ‘consumers’ – to buy more and that which they didn’t need. Susan Strasser explains:

Formerly customers, purchasing the objects of daily life in face to-face relationships with community-based craftspeople and store keepers, Americans became consumers during the Progressive Era. They bought factory-produced goods as participants in a complex network of distribution – a national market that promoted individuals’ relationships with big, centrally organised, national-level companies. They got their information about products, not from the people who made or sold them, but from advertisements created by specialists in persuasion. These accelerating processes, though by no means universal, had taken firm hold of the American way of life.

Food processors needed to persuade consumers to buy their products, and in greater quantities:

People who had never bought cornflakes were taught to need them; those once content with oats scooped from the grocer’s bin were told why they should prefer Quaker Oats in a box. Advertising, when it was successful, created demand…. Advertising celebrated the new, but many people were content with the old. The most effective marketing campaigns encouraged new needs and desires…by linking the rapid appearance of new products with the rapid changes that were occurring in all areas of social and cultural life.

We have always attached a variety of meanings to food, but within a consumer society, the decisions we make about what to buy and eat are shaped to a large extent by the desires and needs manufactured by a massive advertising industry. 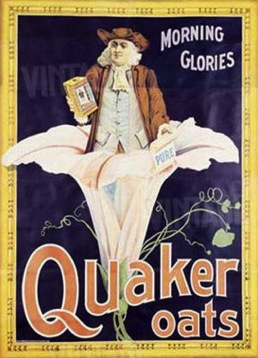 The industrialisation of food production has, as I noted last week, allowed more people to eat better than ever before. But this has come at a cost: we know that many food companies engage in ecologically unsustainable practices, mistreat their employees, hurt animals, and occasionally produce actively harmful food. Moreover, it was part of a process which transformed people from customers into consumers – into individuals whose happiness is linked to what and how much they buy. This does not make us happy – nor is it environmentally or economically sound. Justin Lewis writes:

the promise of advertising is entirely empty. We now have a voluminous body of work showing that past a certain point, there is no connection between the volume of consumer goods a society accumulates and the well-being of its people.

The research shows that a walk in the park, social interaction or volunteering – which cost nothing – will do more for our well-being than any amount of ‘retail therapy’.  Advertising, in that sense, pushes us towards maximising our income rather than our free time.  It pushes us away from activities that give pleasure and meaning to our lives towards an arena that cannot – what Sut Jhally calls ‘the dead world of things’.

As customers were made consumers, so it is possible for us to change once again. How we are to achieve this, though, is difficult to imagine.

Harvey A. Levenstein, Revolution at the Table: The Transformation of the American Diet (New York: Oxford University Press, 1988).

Jack Goody, ‘Industrial Food: Towards the Development of a World Cuisine,’ in Cooking, Cuisine, and Class: A Study in Comparative Sociology (Cambridge: Cambridge University Press, 1982), pp. 154-174.