I spent most of last week at the biennial gathering of historians organised by the Southern African Historical Society. The conference at the University of Botswana was fantastic. Gaborone was, well, less so.* I think that the city is best summed up by an exchange between a conference delegate and her husband, who had spent the morning exploring downtown Gaborone. When asked what he had discovered, he answered: ‘There’s a Nando’s.’

This comment is interesting for many reasons. One of the most striking features of Gaborone – other than the many posters for visiting gospel choirs and the absence of any form of newspaper advertising – is its malls. Having had lunch and dinner at two of them, it seems to me that most of the major shops and restaurants in the city are branches of South African chains: from Spur, that staple of middle South Africa, to the relatively upmarket Primi Piatti. Given the hostility which locals appear to reserve for South Africans – and relations between the two countries became particularly tense during the late 1980s, when ANC and Umkhonto we Sizwe exiles in Gaborone became the target of the apartheid state’s raids – this felt deeply ironic at the time.

Nando’s is an odd addition to the pantheon of South African culinary exports. In his speech delivered at the University of Cape Town during his recent visit to the country, Barack Obama referred to Nando’s – alongside the vuvuzela and Freshlyground – as prime examples of South African institutions. But like so many cultural icons which seem to embody national identity, Nando’s was founded by immigrants.

When I mentioned to friends in the UK that Nando’s is South African, I was often greeted with expressions of confusion. Surely, they argued, it’s Portuguese? Well, yes and no. Before its devastating civil war, Mozambique was a popular destination particularly for young, white South Africans. They visited its pristine beaches, its fun capital Maputo (Lourenço Marques before 1975), and ate its excellent and distinctive cuisine. Indeed prawns from Mozambique are still a regional delicacy. Radio Lourenço Marques – which could be picked up in South Africa – played the music banned by South African broadcasters. Mozambique represented, for young whites at least, relative freedom from the restrictions of a repressive and oppressive South African state.

For part of its civil war (1977-1992), South Africans escaping the country travelled to Mozambique to join up with the exiled ANC. Moving in the opposite direction, legions of whites migrated southwards to South Africa after Mozambique’s independence from Portugal in 1975. Two of these exiles founded Nando’s in Rosettenville, a Johannesburg suburb with large ex-patriot Portuguese populations from Mozambique and Madeira. Although by no means the first or only chicken fast-food restaurant in South Africa – local Chicken Licken (opened in 1981) and foreign KFC (introduced in 1971) do a roaring trade – Nando’s distinctiveness lies partly in its adaptation of the hybrid Afro-Lusophone cuisine which developed in Mozambique.

The chain is probably best known for popularising peri-peri – a sharp, spicy sauce which is a feature of both Portuguese and Mozambican cooking. Its name derives from the Swahili word for the African bird’s eye chilli – the pili pili – which was taken back to Portugal by traders who had been present along the east African coast since the sixteenth century. Portuguese piri piri sauce entered Mozambique with the advent of white settlement, where it was re-adapted by Africans. 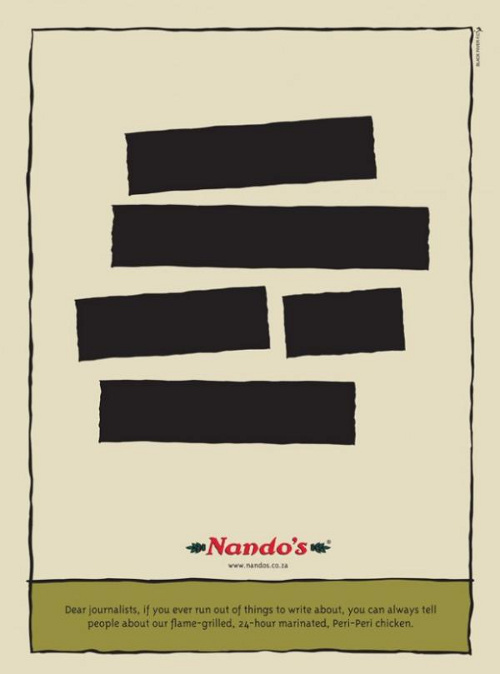 Nando’s comments on the Protection of State Information Bill.

Following the first wave of white South Africans to leave the country during the transition, Nando’s opened its first overseas branch in Australia in 1990. Franchises in the UK (1992), Botswana (1993), Canada (1994), Malaysia (1998), Pakistan (2001), and elsewhere followed. It now operates in the United States and around southern Africa. It doesn’t, as far as I can tell, have a branch in Mozambique.

Nando’s menu is very obviously the product of the long interaction between Africans and Portuguese interlopers over the course of around four centuries. It purveys a global cuisine, and one which has become increasingly globalised as it adapts itself to the tastes and expectations of new countries and new customers. The restaurants in the UK, for instance, are noticeably more upmarket than the Nando’s outlets in South Africa. It’s also the product of the geopolitics of late twentieth-century southern Africa. It was founded as a result of white Mozambicans’ migration to South Africa in the mid-1970s, and catered to local enthusiasm for Mozambican cooking both among migrant Mozambican mine workers as well as those whites who had holidayed in Mozambique. Its first attempt at opening an international store accompanied white South Africans’ migration to Australia.

And yet, for all its hybrid identity, Nando’s identifies itself as a distinctively South African brand – and particularly through its advertising campaigns. Nando’s has a reputation for responding quickly and wittily to political controversies – like blacking out its ads during protests against the potentially oppressive Protection of State Information Bill in 2011. Although this is a strategy which backfires occasionally, it means that Nando’s can cash in – quite literally – by siding with (middle-class?) South Africans’ exasperation with the government and the country’s politicians. 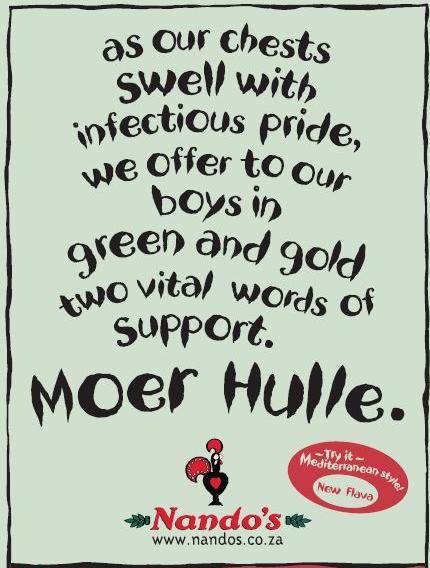 Nando’s expresses support for the Springboks, the national rugby team. ‘Moer hulle’ translates roughly as ‘fuck them’. You wouldn’t say this in front of your grandmother.

It was this which made Nando’s presence in Gaborone feel incongruous. Despite its expensive PR campaigns, Botswana has a deserved reputation for being one of the most secretive states in southern Africa. It’s particularly intolerant of dissent, and has expelled those who have challenged the political status quo. As a recipient of the Media Institute of Southern Africa’s Golden Padlock award in 2011, the real country is worlds away from Alexander McCall Smith’s sanitised and gently patronising depiction of Botswana’s people and politics. I doubt that Nando’s advertising would be legal in Gaborone.

*Never, ever trust the taxi drivers of Gaborone to get you to the airport in time for your early flight to Joburg. And particularly not those who congregate at the Gaborone Southern Sun at 4am. Trust me on this one.