A few weeks ago I was accepted on a writing retreat held periodically at Pullen Farm, a facility owned by Wits University about five hours’ drive northeast of Johannesburg. One afternoon we made the short journey to Barberton, a small town whose chief attraction is that there was a short-lived gold rush there more than a century ago.

Like other countries with vast, sparsely populated interiors – I think of Australia and the US – South Africa does weird towns very well. I’d visited Barberton once before, on an epic family road trip in the late-1990s, and we’ve all since remembered it as epitomising rural South African strangeness.  In some ways we’d been primed to look out for the odd, having seen a newspaper headline which screamed ‘Vampire Mermaid Strikes Again!’ in nearby White River. (It’s the ‘again’ which I find so intriguing.)

It’s difficult to pin down exactly what made Barberton so strange: the quiet, deserted town centre in the middle of the day; the old-fashioned shops selling unusual combinations of things (kitchen utensils with shoes, for instance); or the unfriendly townspeople.  It has some magnificent, deserted, Victorian buildings, which sit side-by-side with Art Deco and 1970s brutalist municipal offices.

Now, Barberton has a new shopping centre which seems to be pulling people away from the rather dilapidated main road. But there is still a general dealer there that buys everything ‘from teaspoons to your mother-in-law.’ I found a copy of Die Volkome Huwelik (The Complete Marriage), the Dutch Reformed Church-endorsed sex manual of the 1970s, for R5 at a junk shop also selling mannequins, a till, and a couple of washing machines. 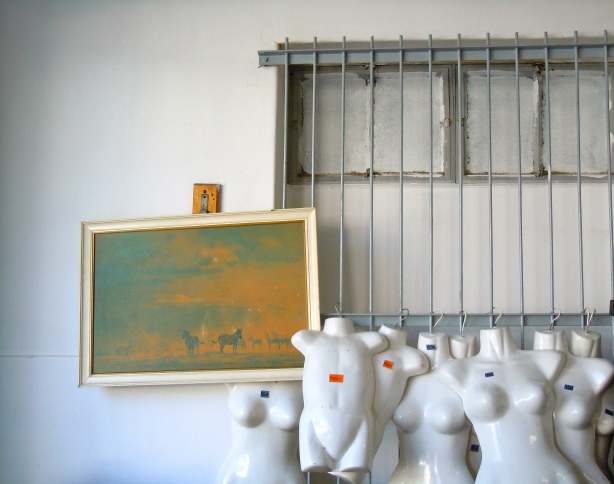 Barberton seems to be trying harder to make something of its brief moment of international significance in the 1880s, with a collection of museums relating to the gold rush. We had lunch at the Phoenix Hotel, established in 1886 to provide accommodation to visiting mine magnates and better-off prospectors hoping to find their fortunes in the newly discovered gold deposits near the town. With the opening up of richer gold seams on the Witwatersrand, these wealthy investors packed up and moved to Johannesburg.

It is now a Chinese restaurant and sushi bar. The menu – which is extensive, and split between the staples of mid-market South African dining and some ‘Chinese’ dishes and sushi – provides diners with a handy guide to using chopsticks. There are lanterns and banners with shiny lettering draped around the restaurant, which was mainly empty.

I had vegetables and stir-fired noodles, and others had Szechuan beef, prawns with rice, spring rolls, and sushi. I’ve certainly eaten more interesting Chinese food elsewhere, but this certainly counts as one of the most unexpected Chinese meals I’ve ever had.

In some ways, though, the presence of a Chinese restaurant – and one run by a Chinese family – in Barberton should not be at all surprising. In the light of China’s growing investment in Africa, recent immigrants from China have settled across the country, mostly opening small businesses. Along with the inevitable Pep Stores, Sasko bread truck, and branch of Absa bank, the Chinese shop is becoming a feature of rural towns and villages.

Johannesburg now has two Chinatowns. There has been a small Chinese-South African population, based mainly in the country’s larger cities, since at least the nineteenth century. Between 1904 and 1907, around 63,000 Chinese indentured labourers were brought to the Witwatersrand to work on the mines, but the vast majority of these men returned home afterwards.  Under apartheid, there was an influx of people from Taiwan after it was recognised by the National Party over mainland China.

In 2008 the Chinese Association of South Africa succeeded in compelling the government to reclassify Chinese South Africans as ‘black’ so that they, too, can benefit from post-apartheid black economic empowerment and affirmative action policies. This was in recognition of the fact that Chinese people also were discriminated against on the grounds of their race before 1994.

There are around 200,000 Chinese people living in South Africa at the moment. The increase in this small population – since the early 2000s, around 24,000 Chinese have settled in South Africa (and I’m not absolutely certain of that figure) – has given rise to warnings of a ‘yellow peril’. Chinese people have been victims of xenophobic attacks, and last year the investigative magazine Noseweek published a disgraceful article alleging that, among other things, Chinese shopkeepers deliberately drive South African businesses into the ground.

This suspicion of recent Chinese immigrants would be interesting were it not quite so old. Similar allegations were levelled against the Chinese in early twentieth-century California and New York, for instance, and particularly on the grounds that Chinese refused, apparently, to integrate socially and culturally.

Ironically, though, the food served so successfully by Chinese cooks to Californian gold diggers or New York construction workers was a kind of hybrid of Chinese – and given the heavily regionalised nature of China’s cooking, there isn’t really a single ‘Chinese’ cuisine – and American cooking. Chop suey and other dishes were invented to use ingredients Chinese chefs could find in the US, as well as to appeal to American tastes.

Having become increasingly accustomed to the more sophisticated Chinese food now fairly easily available outside of China, the menu at the Phoenix Hotel, along with the dragons and fans of the décor, felt strangely retro. It listed the amalgam, ‘Western-Chinese’ dishes – including chop suey – which can be found just about wherever Chinese cooks have set up shop.

Sitting in this small, depressed mining town – there is still a gold mine and a prison, but unemployment is very high – despite the incongruity of eating Chinese food in the Phoenix Hotel, I was struck by the continuities of this situation. The family running the restaurant are part of yet another wave of immigrants – following on from the prospectors and diggers of the late nineteenth century – drawn to a country which seems to offer them a better chance, and certainly more political freedom, than does their homeland. And they continue to serve a cuisine which attempts to be both exotically enticing and comfortably familiar to their customers.